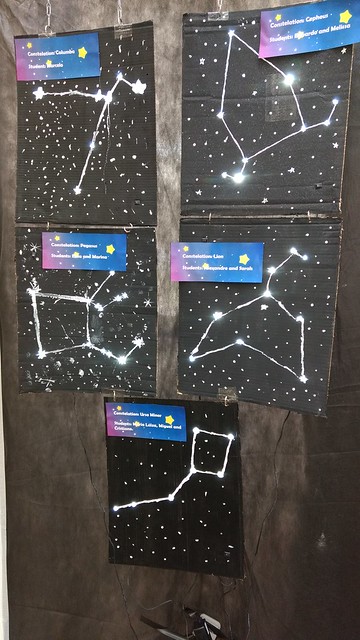 In this STEAM project, children from 8 to 15 years old studied constellations and learned about simple electrical connections using LED’s. We used a video from Smithsonian Institute about stars to inspire them to research the constellations. After that, kids had to choose a constellation to begin the project. The suggestion was for them to work in groups, but they worked in pairs mostly. We suggested this configuration because we wanted to motivate collaborative work. And it worked just fine, since they organized their work very well. We had five sessions of thirty minutes to finish the project. In the first session, the children watched the video, chose a constellation and painted the cardboard. In the second sessions, they the holes, inserted the LED’s and identified positive and negative parts. During the third and fourth sessions, students connected and welded the wires to the LED’s. In the fifth session, we placed the on/off button and the charger to power the project. When the project was complete, we had an exhibition. The kids were really excited about the project. They called their parents and friends to come and see the exhibition. All steps, from choosing the constellations, painting the sky background and connecting the wires were made by them with the guidance of the Resource Center staff. Although it was a long project, they had lots of fun with us.