Casa Thomas Jefferson`s Freedom of Press 2018 program is a strong case of how integrating multiple resources is the right strategy to engage people in lasting initiatives.  Partnerships of all types have made this event possible, and we at the CTJ can only thank each and every part for their involvement.

First, we would like to  thank the American Embassy for proposing such an important theme and a mission: to help engage as many people as possible in Brasilia, as well as  people in other locations in Brazil in talking about “Keeping Power in Check: Media, Justice and the Rule of Law” in innovative ways.

The theme is of course a concern during an election year, so it’s easy to understand why so many BNCs responded positively to the invitation of hosting programs on the theme of Freedom of Press. At the CTJ, we avidly read the TOOLKIT – package programs and links, adapted to the BNCs’ reality, and set an online Design Thinking session. During the DT session, the CTJ team shared some thoughts on how to address the theme with varied audiences and how to reach out for partners (in public universities, in the private sector, and among alumni), and introduced the idea that the BNCs should inspire and get inspired by the American Spaces network. Once warmed up, the BNCs engaged very well in a lively online brainstorming session on Padlet.

In May 2018, the BNCs offered to varied target audiences programs specially designed to promote connection, expression, exploration, and active learning. See on a Google  map an overview of the programs held at Binational Centers in Brazil on the theme of Freedom of Press. Each BNC organised an event using their own time and financial resources. Casa Thomas Jefferson held several programs on the theme. The first one, on May 3rd, was a panel with undergrad journalism students and university professors. On May 8th, the CTJ Makerspace held two events. Both in the morning and in the afternoon, we welcomed public school teachers and students from CIL Samambaia. We started with a Human Library session, in which participants talked to alumni and influential people in the field.Our ‘living books’ shared their own stories related to the theme. Students engage in active learning as they investigate ways to spot fake news. Students practice a skill they should be already using as a habit of mind: questioning and verifying sources

The hands-on part that followed used a game designed by @midiamakersbr during a mediation that involved educators, programmers and journalists in an effort to produce cc pedagogical materials in São Paulo – once again the awesome power of collaboration played a huge role and enriched the program. The CTJ makerspace team adapted and translated one of the news checking games, and counted on the expertise of Elizabeth Silver, a highly skilled and resourceful American teacher, who works at CTJ and co-designed and delivered the program. Besides collaborating with the makerspace team, Wander Filho, CTJ Resource Center supervisor,  organised workshops that offered the public dynamic learning experiences on the theme in the other CTJ branches scattered around Brasilia. RCs celebrated two important dates during the month of May: World Press Freedom Day and Memorial Day  to promote literacy and digital citizenship.

​​Department of Education, Culture and Press - The American Embassy

Casa Thomas Jefferson Culture department in collaboration with the Embassy, invited journalists, university professors and students and the community to  a panel discussion to celebrate the theme. The event was held at CTJ`s modern and welcoming facilities and transmitted on the Embassy’s  Facebook page. 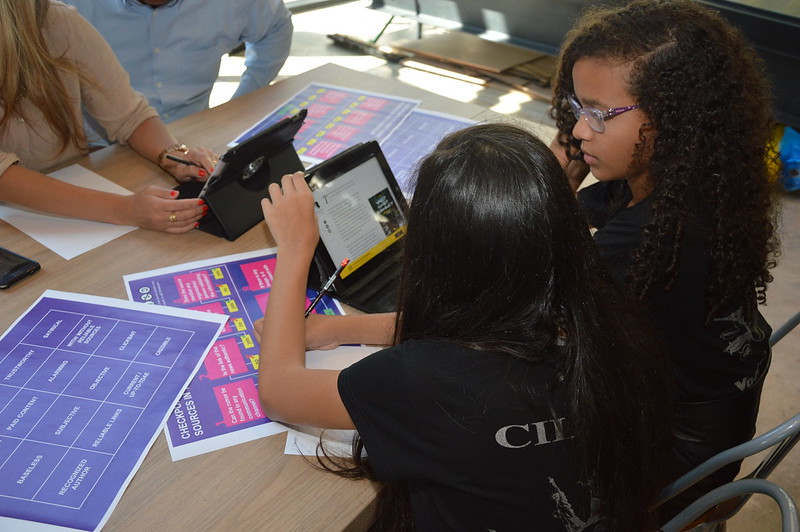